Woman’s Slip and Fall Case Goes Nowhere: What Could Have Been Done Differently? 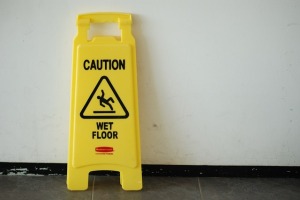 A Florida woman fell as she was going into a fast food restaurant and later sued that restaurant in a personal injury case. Her claim was that she attempted to open the doors but that the door was very difficult to open. As she was pushing the door and trying to enter, her feet slipped out from under her. She said she didn’t see any water and she said that there was a mat where she fell. She also said she wasn’t sure what exactly caused her fall. The restaurant’s official response was that they weren’t aware of issues with their entry doors.

A state court found in the restaurant’s favor

A state court considered all the evidence and ended up granting a summary judgement in the restaurant’s favor. They said that the woman didn’t properly prove that the restaurant was at fault. They were clear that in premises liability cases, the alleged victim can’t simply use speculation about the cause of their accident but must instead prove that the defendant was to blame.

In many premises liability cases, the legal standards that would be used in any other personal injury case are used. This is not the case in Florida. Instead, general negligence doesn’t apply if the injury was the result of a dangerous condition or a defect. Additionally, the specific duty that a landowner has is not always the same – it depends on their relationship with the specific plaintiff.

There are three classes of entrants on land in Florida

According to Florida law, there are three different classes of entrants on land. They include a licensee, who goes onto the property for purposes of pleasure, benefit, or convenience. In this case, the landowner’s duty is to simply to refrain from willful misconduct or negligence, and to warn a licensee of any known dangers.

An invitee is someone who comes onto the property to conduct business with the owner or occupant, and they generally have the highest duty of care required by the landowners. Finally, there are trespassers, who enter the property without permission. It’s true that the landowner still has some duty to them to not willfully cause injury, and if they become aware of the trespasser they must disclose known dangers on the property. However, there are some unique expectations.

If you’ve been injured in a slip and fall accident then you need a Florida premises liability attorney. Gilbert and Smallman are ready to help you with your case. Call us today to get your free case evaluation.