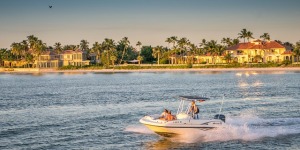 With the recent death of the Miami Marlins’ Jose Fernandez in a boating accident, many Floridians are becoming aware of something that other shave known for a long time: Florida is by far the most dangerous state for boaters. The U.S. Coast Guard ranked Florida number one in boating accidents, thanks to its 671 accidents. California claimed the number two spot, but with just 369 accidents. There isn’t a single state besides these two that has more than 200 accidents. Florida also leads the country in fatal boating accidents with 52 deaths last year.

Why are there so many boating accidents in Florida?

The reasons for these stats are actually pretty obvious. First, there are more boats in Florida than in any other state. However, this isn’t enough on its own. There are over 889,000 boats owned in Florida, compared to about 800,000 in Minnesota and more than 700,000 in both California and Michigan. Yet even when you combine all the fatal boat accidents in these three states, they don’t come close to the number of fatalities in Florida. That makes it pretty obvious that there’s something else going on.

Florida’s boating laws are to blame

Many Florida residents don’t realize just how lax the laws are here. The truth is that in this state, many people driving boats aren’t trained, aren’t regulated, and are too often drunk when driving their boat. In fact, it’s very easy to drive a boat in this state without ever practicing. About 2/3rds of the boating accidents in 2013 were caused by people who didn’t have a second of formal training.

There isn’t even a legal minimum age requirement in this state. For people born before 1988, no courses are required to drive a recreational watercraft. It’s true that the same drinking limits that apply to car drivers apply to those driving boats, but it’s also true that boat drivers are rarely ticketed, despite how many are drinking behind the wheel.

At Gilbert & Smallman, we’ve seen these situations way too often: A person drives a boat without proper training and someone gets hurt. If you’ve been in this situation, then now is the time to contact us. As personal injury attorneys, we can take a close look at your case to determine who was at fault. Call us today for your free case evaluation and let us help you move on to the next step in your life.