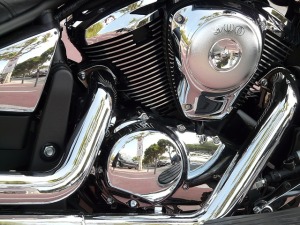 I started riding dirt bikes when I was only 7 years old.

My first true motorcycle was a little Honda CB250 that I bought with money I had saved from a summer job when I was 15 years old. I bought it for cheap because it wasn’t working. My father and I took it apart and rebuilt it that autumn and winter. We had it running like the day it left the factory by the time I got my license that spring. I loved that bike and rode it whenever I could. It made me pretty popular too.

I continued to enjoy my Honda in college, and I also bought a used Kawasaki Ninja the summer of my sophomore year. I moved to Chicago for work after college, so I sold both my Kawasaki and my Honda. I figured I wouldn’t want either with the terrible winters and no garage space in my new apartment.

It wasn’t long before I bought a new bike. This time I bought a Gromlin. It is a neat little city motorcycle. It has great mpg and it looked like a miniature track bike. Once again I was in love.

Now we get to the bad part of this story. One day while riding my nearly-new Gromlin, a taxi cab rolled through a stop sign at an intersection. He hit me on my right side as I made my way through the intersection and I hit the ground with my shoulder and head afterwards.

I was rushed to the emergency room after a bystander called 911. It turned out that I had brain trauma, in addition to breaking my leg in multiple places, my wrist, and a couple ribs.  They were worried that I wouldn’t make it through the internal bleeding and the pressure on my brain so I needed emergency surgery. I made it through and I’m here to tell about it today. Luckily, I had a great physical therapist, in addition to the top-notch surgeons that patched me up in the hospital. I was able to recover in a shorter time than anyone expected and I am now back to riding my beloved motorcycles. However, I’m lucky and my expenses were largely paid for by insurance. If you find yourself in this position, make sure to contact a lawyer as soon as possible. If I didn’t have my guy, I’m not sure that things would have turned out so well.