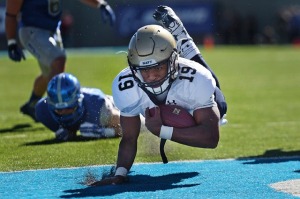 I hurt my shoulder playing pickup football in college and it haunted me for years afterwards. I am writing this so that you don’t make the same mistakes that I did. I dove to make a catch, and someone else fell on me. We heard a pop, and after he got off of me, we found my arm hanging off my shoulder. I had dislocated it. Since we were stupid college kids and had been drinking, we thought it was best that the one of us that had been anointed an Eagle Scout had enough medical training to safely pop my humerus back in place. It hurt like hell but it worked. Again because I was a stupid college kid, I never got my shoulder checked out after I dislocated it, even though it hurt for weeks. Eventually it stopped hurting and a continued to be dumb by assuming that meant it had completely healed.

Fast forward to the following summer. I had joined a beer league softball team and I was playing center field one Sunday when again I dove for a ball. This time there was no one around me, but I heard that same pop when I hit the ground. Sure enough, my shoulder had dislocated again. This time, one of my teammates took me to the ER instead of trying to fix it on the field. At the ER they took some X-rays and found that I had torn some of my cartilage in my shoulder the first time that I hurt it, and that had caused my shoulder to dislocate so easily the second time. They told me that I would probably need surgery but that I could go home without it if I took care of it. They said that I would have to abstain from sports until I got it fixed.

Once again, I didn’t do as I should and I ended up dislocating the same shoulder a third time while horsing around with my dog. This time I got the surgery and after 6 months, I’m able to exercise again.

This situation was my own fault, but remember that if you or someone you know is injured and that injury is exacerbated by someone’s negligence, you should contact a lawyer as soon as you can.