My Son Broke My Nose 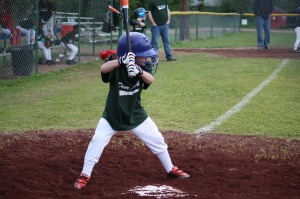 At least, you will see it coming faster than I did.

My son had recently started playing little league. We had practiced some in the yard, but he was still getting the hang of keeping his swing consistent, since he was, you know, eight years old and a little goofy.
So this was his first game. There had been some batting practice that week, but the coach had been much more worried about teaching basic fielding to start out the season. I was proud that my boy had got the hang of catching and throwing.
My son came up to bat when his turn was called, and he was amped up. I got into position just outside the dugout, hoping to capture the moment on my smartphone. He missed the first two pitches but he made contact on the third, sending the ball straight into the outfield. As he did so, my son opened his hands in joy and triumph, which in turn sent the bat flying. As I am sure you already guessed, that bat came for my face. Even a child’s aluminum bat can do some damage, and I was rushed to the ER.

The plastic surgeon fixed my face, but I was so sad that I ruined the day for not only my own child, but everyone else there. This is why they ask parents to stay behind the fence. Don’t do what I did.
While this situation was clearly my fault, remember that if you are injured, and you think that it is the result of someone else’s negligence, remember to contact a qualified attorney at the earliest possible opportunity. There is never any reason to suffer, and pay for it, if your pain is caused by another party.