Should Florida Have Helmet Laws for Skateboarders? 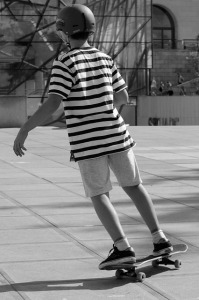 Some Florida lawmakers want to pass a law that anyone riding a skateboard must wear a helmet. Others believe that this is going too far. Where do you fall? Read on to learn what caused the increase in interest in this law.

Do you know how many people are injured in skateboarding accidents?

People who don’t support the idea of a skateboarding helmet law often say that it’s because this isn’t a large enough problem to warrant it. However, would you be surprised that, according to the Insurance Information Institute, more than 100,000 people suffered head injuries in 2014 alone while riding a skateboard?

What would the law say, exactly?

House Representative Richard Stark is the congressman who’s working hard to get the pill to pass in the House. The law he’s proposing would make it illegal for anyone who is under 16 years of age to ride a scooter or a skateboard without a helmet.

Why would the law only affect kids?

Both critics and supporters of the law want to understand why the law would specific that only kids must wear helmets. After all, if head injuries are an issue then they’re an issue for people of all ages, right? For example, consider that a few years ago there was a student at Florida State University who fell off his skateboard. He was 18 years old and was going from the library back to his dorm.

As he went down a hill, he fell backwards, hit his head, and suffered from a traumatic brain injury. The doctors put him into a coma so that his brain could rest and so that he would be able to accept the level of pain medications they were using. After months of therapy, the student did recover.

No one was at fault for that accident – but what if they were?

In that particular case, no one was found at fault for the skateboarding accident and it was deemed just that – an accident. However, what if there was a law that required him to wear a helmet? Would you be at fault? What if he’d had a helmet and it had failed to protect him?

These are all good questions and there are no simple answers. If you or someone you love has been injured in any type of accident, and you believe that someone else was at fault, then you need to talk to a personal injury attorney right away.