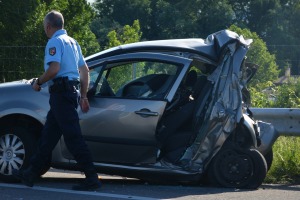 Not all teen drivers are ready to drive. A recent story in Miami-Dade proves this point all too well. According to an article in CBS Miami, Police: Teen Driver Runs Stop Sign, Causes Violent Crash this crash was terrifying enough but could have had even more catastrophic consequences for everyone involved.

Ted Scouten writes, “A violent crash in Miami-Dade has landed four people in the hospital and the impact nearly sent one car into a home. In the aftermath, a petrified 4-year-old girl and her mother were loaded into an ambulance. Three others were hospitalized, as well. The mom and little girl were in a BMW driven by another woman. That driver got it the worst.

“They had to cut the car to take her out. It looked like, at one point, her hand went down like she fainted,” said witness Virginia Sands. Residents nearby heard the impact from nearly a block away. One car ended up next to a home. “I live five houses down and I heard a loud noise. It doesn’t sound like a normal crash, it sounds like a bomb,” said Eudaldo Cuello.

According to investigators, two teens were in the other car, a Nissan. Florida Highway Patrol said they were heading east on 43rd Street and plowed into the BMW, heading north on 87th Avenue. Police say not only was the teen behind the wheel when he should not have been, he also didn’t stop at a stop sign.

“The individual who caused the accident, by running the stop sign, was a minor operating a vehicle with a learner’s permit,” said FHP’s Joe Sanchez. The law requires a licensed adult to be with the teenage driver. According to a couple of students who spoke to FHP, both teens in the car are 16 and students at Southwest Senior High School. Of the four victims, one was listed as a trauma alert and another was listed in critical condition.”

This is obviously a situation in which one person not following the law led to potentially serious injuries. If you or someone you know was injured as a result of the negligence of someone else, contact the Law Offices of Gilbert & Smallman today. We offer free consultations 24 hours a day via phone and have offices in Miami, Hollywood, North Miami, and Tallahassee.